Lluc Julià: “Rephotography serves to expose the landscape we have spoiled and to reclaim what we have been able to preserve”

Lluc Julià Fàbregues (Barcelona, 1969) is a graphic designer specialising in editorial content. Since 2003 she has been capturing the change experienced in the islands over the last century through rephotographs, a technique that consists of repeating a photograph of the same site, with a time lag between images, documenting the past and present of a specific area. To celebrate the 150th anniversary of the APB, a collection of rephotographs of the ports and lighthouses of the past and present has been commissioned to go down in history.

How did the idea of these rephotographs come about?

The idea came from the book Voyage en Inde, a book of rephotography by the Italian Antonio Martinelli based on engravings of Hindu temples from the period of British rule in India. I thought it was a great way to illustrate the state of the heritage of a particular place and space. Later I came across Die Balearen, the work of Archduke Ludwig Salvator of Austria, and thought it was a perfect opportunity for me to use rephotography. Not knowing to what extent the engravings are true to life made me unsure at the beginning. However, I soon realised that the archduke's encyclopaedic philosophy reveals the few artistic licences he allowed himself, such as, in some cases, minor modifications of scale and perspective or the addition of a trivial element. Another aspect I value in this project is giving visibility to the archduke's work beyond his character.

What do you look for to make such careful compositions?

Once you have located the exact place from where the original image was taken, which is not always possible, we must consider three essential elements: perspective, framing and the time of day. We cannot always count on all three, but the closer you get, the better the result.

How do you go about locating the spaces?

First of all, I try to locate them from home using Google Maps. This is a first filter that allows me to see possibilities and discard impossible or very complicated rephotographs. At this point it is also important to determine whether the original image is taken in the morning or at dusk, so that I can go at a time when the light is as close as possible to that of the original. With this preliminary task you can tackle the fieldwork with a lot of work done and a better chance of success. However, I have had to go to most of the locations more than once, either because of a mistake with the perspective, with the time of day or because of bad weather, which also happens quite often...

You started to rephotograph the islands on the basis of the Die Balearen engravings and now based on old photographs for the APB. What has surprised you most about what you have learned?

There are many aspects that you already expect when you compare the present and the future, such as urban growth. On the other hand, what has surprised me most is how the vegetation has gained ground. Both the archduke's engravings and the old photos show bare islands with practically no vegetation. I haven’t been able to capture many of the landscapes of Die Balearen because the vegetation has prevented me from accessing the exact spot or has completely blocked my view.

In general, have the landscapes improved or worsened?

These projects serve to expose the landscape that we have spoiled and to reclaim what we have been able to preserve. This can also be applied to architectural heritage. What motivates me about photography is being able to create tools to raise awareness, in an attractive, understandable and even playful way, of the impact the human footprint has on the environment itself, especially on the natural and cultural heritage of the Balearic Islands.

A place that moves you.

I couldn't pinpoint a specific place from those I have rephotographed that particularly moves me. What I can describe is an exciting moment: When I find the exact place from where the original image was taken and I think of the person who was there 100 years ago or more, capturing it from the same place.

This kind of project is made possible by technology. Will electronic devices replace paper? Are you an ebook or a book person?

Technology helps a lot in this type of project and it is admirable how such an incredible work of art as Die Balearen could be done with the technical means of the time. There is no doubt that today's technology gives us the opportunity to reveal our work to a lot of people with very little effort. I personally believe that electronic devices and paper are complementary to one another. In many ways mobiles have replaced paper, but I don't think they will make it disappear. I read both ebooks and physical books, but I prefer the latter. I am a graphic designer specialising in editorial and content design and I like to have a well-edited book in my hands. In this case, for example, the ebook has many limitations. 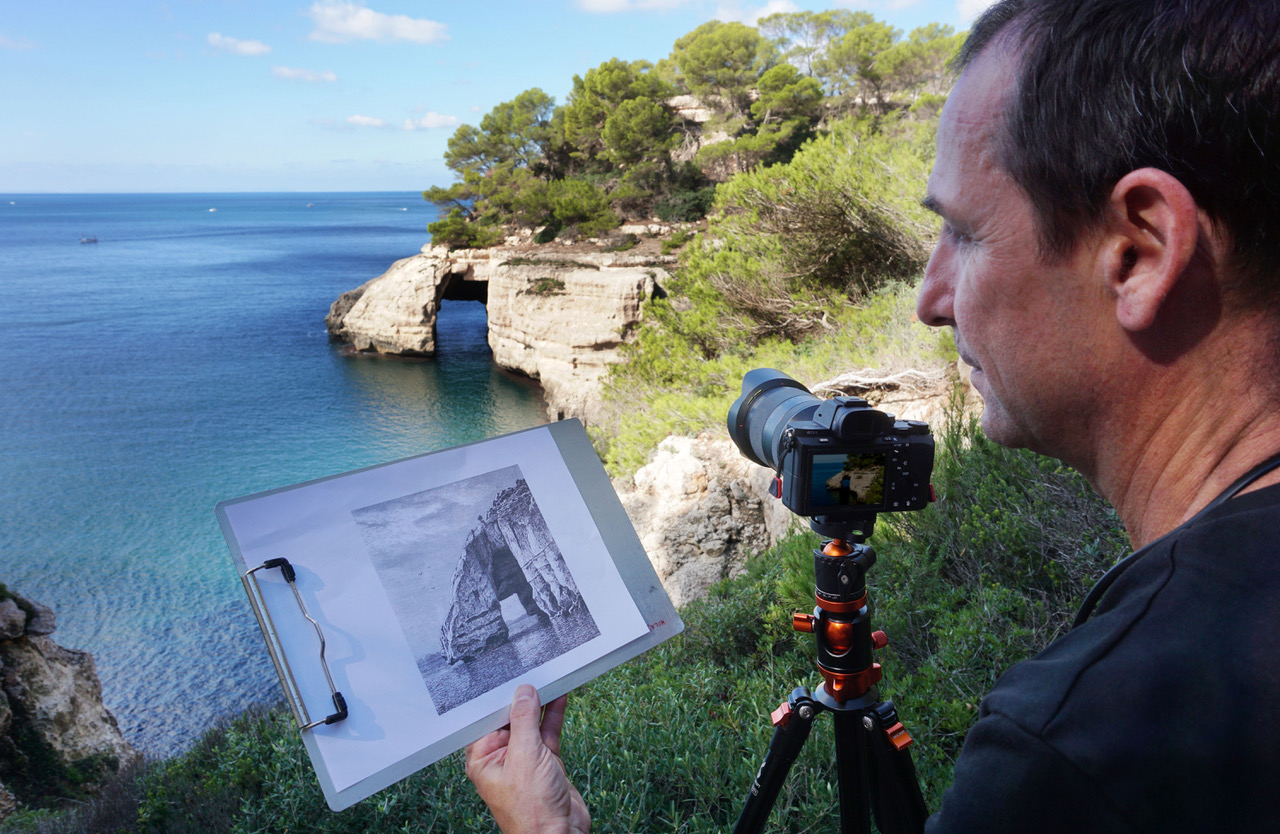