The study, "Analysis of Mobility in Palma based on Data Provided by the SmartWifi Network", was conducted by the UIB team comprising the PhD students Bartomeu Alorda Ladaria, Vicente Ramos Mir and Maurici Ruiz Pérez, while the project, “Study on the Mooring of Symphony of the Seas in Palma”, was conducted using the resources of the APB.

The first study was based on a record of geolocation data of mobile devices detected by the SmartWifi network in Palma (a free wifi network that covers both the port and the city of Palma), using the data to monitor the movement of passengers on the Symphony of the Seas cruise ship. The second study entailed, on the one hand, counting the number of passengers that disembarked and embarked the cruise ship and, on the other hand, conducting a survey to find out what activities passenger did in Mallorca and the means of transport they took to get to the activity location. Both studies were conducted during its eight-hour stopover in Palma on Monday 23 July 2018, starting at 8 am and finishing at 4 pm.

Of the 6,413 passengers, on board what was at the time considered to be the cruise ship with the largest passenger capacity in the world, 5,271 disembarked, which meant that 17.8% decided to stay on the ship. Of the passengers that disembarked, 51% (3,280) decided to visit Palma: 389 on excursions and 2,891 at their own leisure. Meanwhile, 18% of the others decided to go to another destination and 13% decided to go on an organised excursion that did not include tours of Palma. The data was sourced from the surveys conducted on 849 passengers who decided to visit the Island of Mallorca at their own leisure and from figures provided by the shipping liner on passengers that had booked an excursion prior to docking.

Despite the fact that the cruise ship organised many activities in Mallorca for its clients, the majority of the passengers that stepped foot onto the island preferred to visit it by themselves. According to those surveyed, 71% of the passengers who wanted to visit the island by themselves decided to go to the centre of Palma, while 10% visited other locations. Other areas of interest were the Palma Beach (5%), the Bellver Castle (4%), Palmanova Beach (4%), the Portopí shopping centre (3%) and a tourist bus tour (3%).

In terms of the means of transport chosen, 49% of the passengers surveyed said they opted to take the shuttle bus or buses available to get from the ship to the city centre, while 44% decided to take a taxi. Some other less-common options were also mentioned, such as taking the Line 1 bus of the EMT (Municipal Transport Company), walking, taking a so-called 'taxi tour' and even the much more unusual option of hiring a bus.

The aim of the study conducted by the UIB on the same date was to focus on the movement of the passengers on Symphony of the Seas during their stay in the city of Palma. The team was able to visualise the position of anonymous passengers by analysing the geopositioning data provided by the SmartWifi network installed at the port and in the centre of Palma, which the APB and the Council have shared through the 365 Palma de Mallorca Tourism Foundation since 2016.

In order to do that, an attempt was made to identify groups of devices that had a high probability of belonging to the passengers. As such, algorithms were programmed taking into consideration that the mobile devices of the passengers had not been detected before that date, that their detection coincided with the time the ship was at the port and that the location of the devices had at some point during the day been in the city and at the port.

The data obtained showed that 90.4% of the passengers observed by the SmartWifi network visited the centre of Palma, while 73.8% were found at some point on the promenade. The results of the analysis of mobility suggests that the proportion of devices, considered to belong to the passengers of Symphony of the Seas, that was observed at the points of interest was very low in comparison with the total number of devices observed in the same area.

In the Mallorca Cathedral area, only 2% of the devices captured by the SmartWifi network were attributed in the study to passengers of Symphony of the Seas. Furthermore, only 1% of the devices detected on the promenade were attributed to the passengers and their presence coincides with the embarking times. As such, it can be deduced that their presence in the area coincides with their return from visiting the city. Finally, less than 1% of the devices were detected in Calle Jaume III and Plaza de España.

The fact that there was also a peak in Calle Jaume III at 1 pm led the researchers to believe that it could have been down to the passengers deciding not to return to the ship for lunch and to extend their visit of the city. Conversely, the maximum peak of passengers in Plaza de España was at 11 am, which may have been due to the policy implemented by the Council of Palma that establishes different bus parking areas for cruise ships. Therefore, the most significant entrance into that area at said time was detected due to the application of said policy or to the timetable of public transport from the port to the centre of Palma.

Both documents are limited to analysing the data obtained and not the level of street congestion in Palma. However, the information obtained allows us to have a much more accurate idea of the real percentage of passengers on each cruise ship that visit Palma and the peak congestion times.

The UIB concluded that: "this study is limited to showing the methodology of the analysis proposed and the results obtained from the cruise ship studied and not to analysing in depth the degree to which congestion on that day in Palma was perceived. As such, it serves as another tool that can be used to make progress on managing said street congestion." 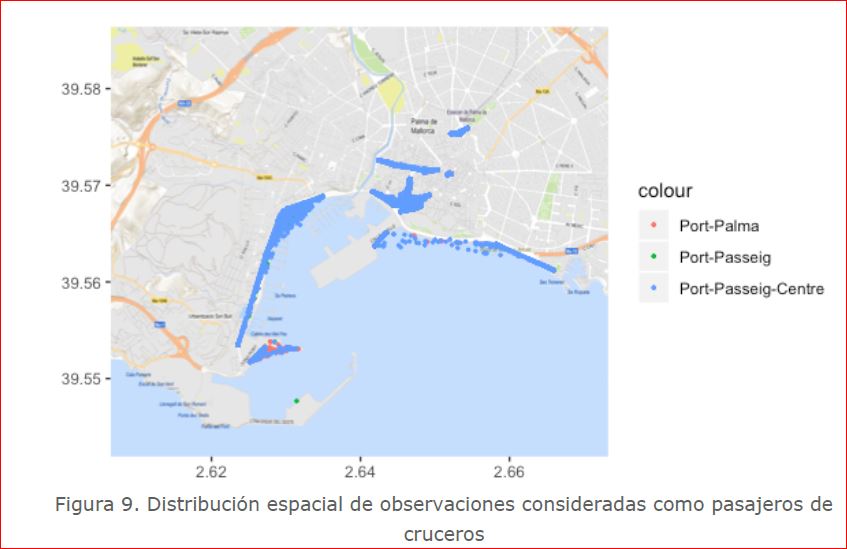 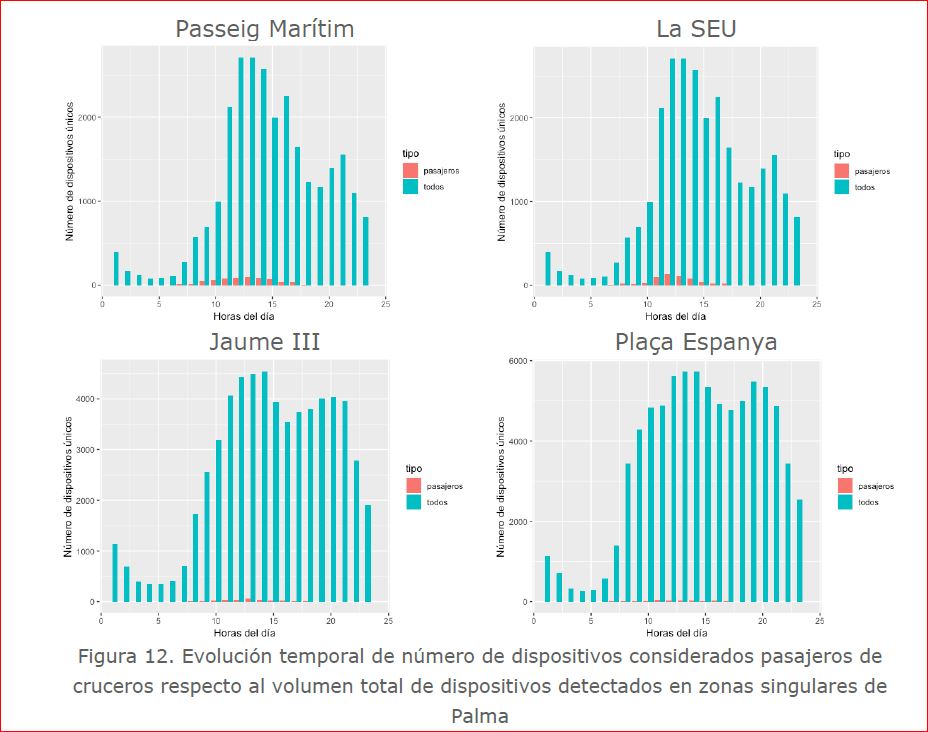 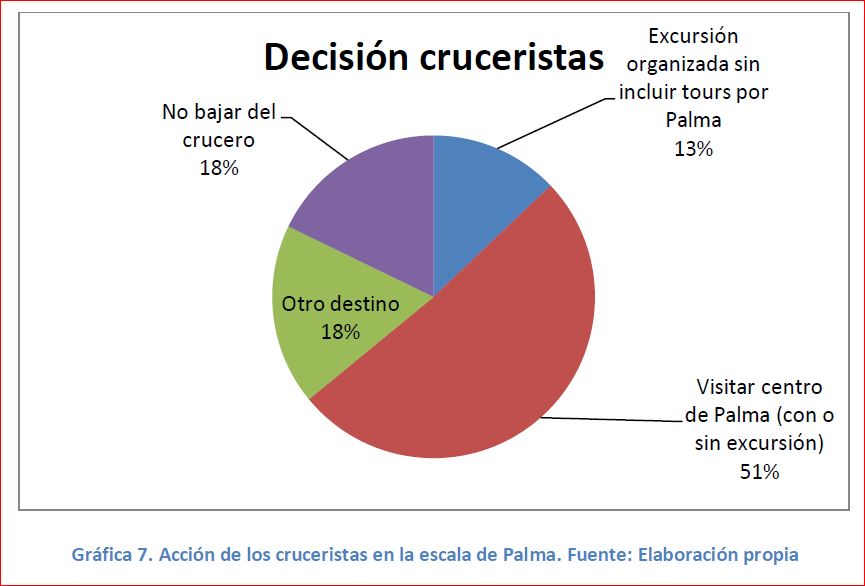 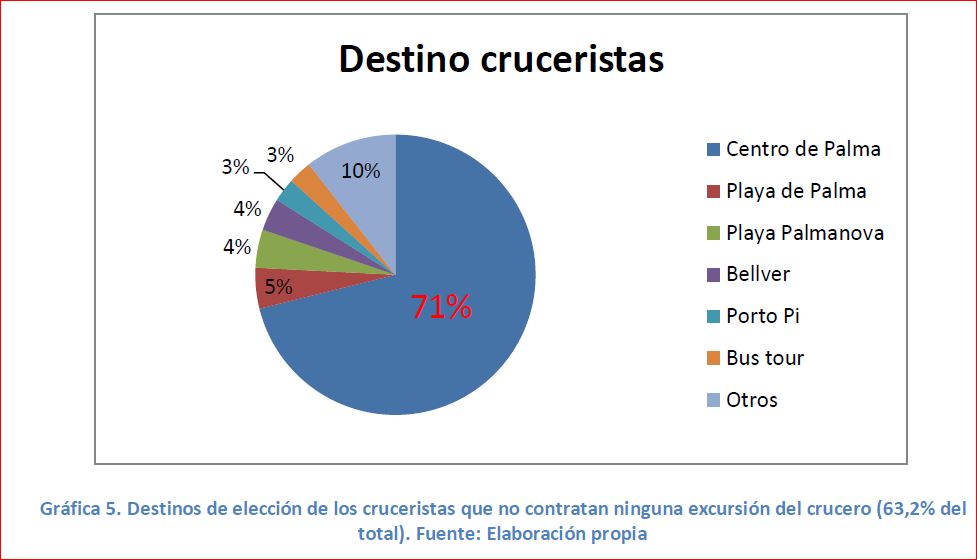 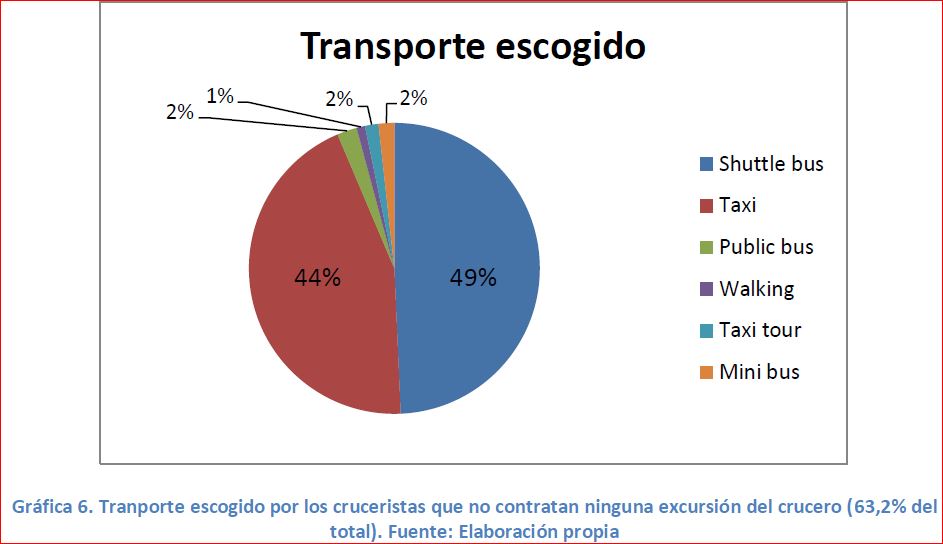